Extract from Sylvia Queen of the Headhunters

On the morning of 24 September 1941, a royal salute from twenty-one cannon boomed out over Kuching, the toytown capital of Sarawak. Shortly before nine o'clock, as their last echoes died away, Rajah Vyner and Ranee Sylvia emerged from the Astana, the royal palace across the river from the government offices and Main Bazaar, and solemnly made their way down to the landing stage. The Rajah, a diffident Englishman who had reigned over this jungly kingdom on the island of Borneo for twenty-four years, wore an ill-fitting white duck uniform and solar topee, and walked beneath a slightly tatty yellow umbrella, the emblem of royalty in Sarawak, held aloft by a Malay bearer. The Ranee, wearing her royal yellow sarong, followed a few paces behind - besides being her husband's consort, she was also, according to custom, his slave.

Rajah Vyner's family, the Brookes, who claimed descent from the ancient English West-country family of Broke, had ruled Sarawak for three generations, during which time their realm had grown to cover an area the size of England. Popularly known as the White Rajahs, theirs was the only English family ever to have occupied an Oriental throne. They had their own flag, currency, postage stamps and armed forces, and each Rajah had the power of life and death over his subjects, variously Malays, Chinese and Dyak tribesmen notorious for their habit of headhunting. The third Rajah, educated at Winchester and at Magdalene, Cambridge, was one of the few monarchs left in the world who could still say 'l'Etat, c'est moi'. Yet he ruled his kingdom, it was noted, rather as if it were an English country estate, with tribal chiefs always welcome at the big house. His family appeared in Burke's Landed Gentry as 'Brooke of Sarawak', and his career was encapsulated in one of the more arresting entries in Who's Who: 'Has led several expeditions into the far interior of the country to punish head-hunters; understands the management of natives; rules over a population of 500,000 souls and a country 40,000 sq miles in extent.'

It was now a hundred years to the day since an uncle of the Sultan of Brunei had ceded the government of Sarawak to Vyner's swashbuckling great uncle, James Brooke. Everywhere in Kuching there were flags and bunting to celebrate the centenary of the Brooke Raj. All the leading chiefs and representatives from the various communities of the country had gathered together at the capital, bearing gifts for the Rajah and Ranee. Among the decorative arches was one erected by the 136-strong Japanese community, whose funds had recently been frozen as a war precaution. The festivities would go on for a week, centred on the Grand Fancy Bazaar, with entertainments ranging from Dyak war dancing to a stall which invited participants to kick a dummy of Hitler. Boy Scouts patrolled the grounds to deter gatecrashers.

After crossing the river in the ornate state barge, a gift from the King of Siam, the Rajah and Ranee landed in front of the court house, built by Vyner's father Rajah Charles in 1874, where Rajah Vyner had continued to dispense justice as judge, jury and sentencer, sitting like a second Moses on the chair of state. Accompanied by his chief secretary, the Rajah inspected the guard of honour, which had been furnished by the Sarawak Constabulary, and received the royal salute. The Ranee walked to one side, escorted by the leader of Sarawak's Malay community. They proceeded on to the government offices, where once a week Rajah would receive any of his subjects who wished to talk to him, attended only by two police constables to keep the queue orderly. Detachments of the Royal Navy - four of whose vessels lay at anchor in the river - Indian Army, Sarawak Rangers, Sarawak Volunteer Force and the Sarawak Coastguard stood to attention on either side of the route.

Seats for their Highnesses had been placed at the entrance to the cool, white offices under a canopy in royal yellow. To either side there were covered stands for members of the government and leaders of the various communities. When the Rajah and Ranee were seated on the throne, a band struck up the national anthem, which had been composed by Vyner's mother, Ranee Margaret. This was followed by the reading of addresses and pledges of loyalty to the Rajah, beginning with a message from King George VI, who wished 'to convey to Your Highness My congratulations on the centenary of the State of Sarawak, and to express to you and to the peoples of Sarawak My best wishes for your future prosperity'.

Among the many other messages came one from Air Chief Marshal Sir Robert Brooke-Popham, a distant kinsman of the Rajah who had recently taken up his post as Commander-in-Chief, Far East, at the misnamed 'Fortress Singapore'. Part of Brooke-Popham's job was to organise the defence of Sarawak, guaranteed under the Treaty of Protection (1888) with Britain, which also controlled its foreign relations as a protected state. He thanked the Rajah for his co-operation in carrying out the various defence measures which he had advised. Only time would tell just how inadequate these measures were.

Rajah Vyner had always dreaded these state occasions when he was the centre of attention, but on this morning he had required more than the usual coaxing from the effervescent Ranee to persuade him to go through with the rigmarole. His ability to charm his subjects had helped make him an extremely popular ruler, but on this occasion he looked uneasy and distracted as he rose to reply to their loyal addresses. Two days later, at an all-male dinner party at the Astana to celebrate the Rajah's sixty-seventh birthday, one of the guests, a visiting naval officer, observed that his host was 'a very nice man to meet, but unfortunately he seems to have lost interest in governing his country . . .' As part of the centenary, Vyner had introduced a new constitution which would curtail his absolute powers, and in the opinion of the naval officer, it was 'just as well that he has handed over. He displayed a lack of interest and ungraciousness throughout the ceremonies, which we thought was a jolly bad show as the enthusiasm of his people was very obviously sincere.' 'The Ranee,' added the naval officer, 'I think is slightly dotty, although she can be quite amusing, and what with the daughters marrying dance band leaders and all in wrestlers they are a pretty rummy lot.'

The events that followed on the heels of the centenary, starting with the Japanese invasion and ending with the Rajah's badly-handled abdication in 1946, were the culmination of a steady decline in the power and prestige of the Brooke Raj that had begun two decades previously. The whimsical Rajah Vyner, his Rasputinesque private secretary and the ham-fisted British government all bore their share of responsibility for the clumsy and seemingly underhand way in which the dynasty was brought to an end. But in many people's eyes a bigger villain was Ranee Sylvia, the extravagantly-dressed author of eleven books who was submissive consort one moment, outrageous self-dramatist the next, described by the press as 'that most charming of despots', and by her own brother as 'a female Iago'. The Colonial Office branded her 'a dangerous woman', full of Machiavellian schemes to alter the succession and often spectacularly vulgar in her behaviour. After observing the Ranee dancing with two prostitutes in a nightclub, then taking them back to the palace to paint their portraits, a visiting MP from Westminster concluded that 'a more undignified woman it would be hard to find'.

When Steven Runciman wrote his history of The White Rajahs (1960), he conceded in his Preface that as far as the last reign was concerned, he had been reluctant to offend those 'actors' who were still living, clearly having in mind Rajah Vyner and, uppermost perhaps, Ranee Sylvia. 'An historian dealing with characters long dead,' he wrote, 'may legitimately assign motives, speculate on rumours and even indulge in a little scandal-mongering. It is neither courteous nor helpful nor wise for him to do so when he is dealing with the fringes of the present.'

Privately, Runciman admitted to rather stronger views on the last Rajah and Ranee than he was prepared to publish. Writing to Vyner's niece shortly before his book came out, he said that his terms of reference (the book had been suggested and sponsored by the colonial government of Sarawak), tact and fear of legal proceedings had 'kept me from saying too openly what I think about the later stages, but I hope that what I think shows through well enough . . .' 'Of the Ranee,' he wrote in a subsequent letter, 'I've said very little, as I didn't want to risk libel.' This book, of which Ranee Sylvia is the central character, is subject to no such constraints, since she died in 1971, eight years after Rajah Vyner. Their last surviving daughter died in 2002. 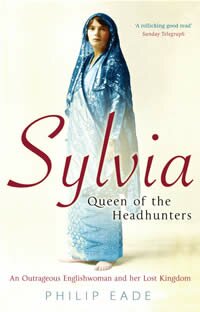